Start with a diamond

Start with a setting

Journey of a diamond

How to buy a diamond

Start with a diamond

Start with a setting

How to buy an engagement ring

How to buy a diamond

VRAI created diamonds are only as exceptional as the people who craft them. Meet members of our artisan team whose remarkable skills lead to the world’s most mesmerizing diamonds.

“What we’re doing here is truly pioneering work on diamond and the team here is driven. I see enormous opportunity for tech applications and it’s very exciting to be a part of the race.”

Creating beautiful, high-quality diamond that’s perfect for jewelry and technology applications doesn’t just happen – there’s an enormous amount of science, technology, and effort that goes into the process. Dr. Charlotte Herbig leads our Materials Science and Metrology team at Diamond Foundry. Metrology is the scientific study of measurement, and in her role she is building out our metrology department and developing new techniques for diamond. With a B.S., M.S., and P.H.D. in Physics and a background in materials science and semiconductors, Charlotte has plenty of insight into different metrology techniques of 2D and 3D materials.

Charlotte is focused on understanding and identifying how we correlate data to create the best diamond possible. This includes what we measure, how we measure, what tools to measure with and then developing actionable reports. All of this is done to improve the quality, color, and size of our diamond. We sat down with Charlotte to discuss the interesting work she’s doing here.

What is your day like as a diamond material scientist?

I spend a lot of time researching what properties across gem and tech applications we can measure, identifying what we should measure and then developing new methods in order to get more information on our diamond and products. We’re experimenting with different techniques to measure the stress distribution in our materials.

I’m also building out our Material Sciences and Metrology team. This team will grow a lot over the next year as we continue to work on everything from creation to production. It’s incredibly powerful science because by measuring just one thing we can increase our yield by handing off our findings and implementing our learnings.

What excites you about diamonds? What we’re doing here is truly pioneering work on diamond and the team here is driven. There aren’t decades of academic or lab research, so a lot of things we need to develop ourselves. So much isn’t known about our diamond, and there is so much to learn and investigate about our diamond blocks.

Big questions always come up. For example, how do we assess and look at a diamond in a similar way that a Gemologist does? How do we measure color of the rough diamond so we can correlate it to the color that the customer will see when it’s polished? These are new scientific areas to explore.

How did your past work prepare you to work with diamond? There is a big connection with my work in the past, especially when it comes to working with semiconductors and devices during my research and studies at UC Berkeley and University of Cologne. I specialized in material structuralizing and with my background in material science and semiconductors it makes sense now.

Some of my research was focused on 2d materials like graphene - another carbon that’s atomically thin in a layer - and while diamond is a 3D material, there are similarities in the growth process. While I would not have thought of myself in the diamond space, looking back it all overlaps.

What drew you to Diamond Foundry? There were a number of things that were very attractive to me. Everything we do is better for the environment and people since we grow diamond in a lab rather than mining. Using diamond in the semiconductor industry is such a smart idea, especially while still having the gem business running successfully. I see an enormous opportunity for tech applications and it’s very exciting to be a part of the race.

“We are constantly evolving the process to create better quality diamonds. The technology is impressive. I thought, why not make diamonds?”

Our foundry in Wenatchee, Washington uses 100% hydropower from the Columbia River in America’s beautiful Pacific West. As a certified CarbonNeutral company, our zero-emission foundry is a core component of our company’s mission.

Barney Flusche, Operations Manager of the Wenatchee foundry, oversees all elements of the foundry including preparation for our future expansion and an increase in hiring as we continue to scale towards mining size. It’s an exciting environment to be working in and we sat down with Barney to learn more about what a day looks like.

What does an average day look like at the Wenatchee foundry? Every day is a little different, but a major function of my role is planning and making sure the right people and the right materials are available for production. We have different production processes. The major process is stone cycle to create rough diamond, loading seeds into the reactors and unloading grown stone from the reactors. Then, we do a visual grading and measurement, and some stones we cut with a special laser before shipping to our other locations. We are constantly evolving the process to create better quality diamonds. We also have the seed stock process (from which to create more diamonds) and the puck cleaning process.

What’s it like operating a zero-emission foundry? The biggest piece is using hydro-electric power for the reactors. By using 100% hydropower we’re not putting any carbon into the air. There are no downsides. The power and our foundry function just like using regular power but it’s less expensive and better for the environment. Our power is just generated by a river dam instead of a fossil fuel plant.

What surprises you about working with diamonds? There are so many things. What is most surprising is that when a block of rough diamond comes out of a reactor it doesn’t look like a diamond; it looks like a black rock. The stones that come out of each run are always different and it is still amazing to realise we create something in a few weeks that took the Earth millenia to create. The demand is also high and keeps growing, higher than current production, and that’s why we’re expanding. That is just the gem aspect, we are also developing techniques to grow diamond wafers for use in new generations of high speed electronics.

Can you share a bit about the team structure? In the manufacturing area we have production technicians, equipment technicians, facilities technicians, and engineers. Then we have support departments like shipping and receiving, who also do inventory and manage the warehouse. We have an interesting team with the technicians coming from widely varied backgrounds. Our team is made up of local college graduates as well as people from the local agriculture industry, recent high school graduates and ex-military. We have one person who captained a crab boat in Alaska and another who was a US Forestry Service firefighter. Finally we have people with local scientific, electronic assembly, or machining experience. We are currently hiring and will likely have more hiring periods later this year and next year.

How did your background prepare you for this role? I have a Physics degree and was a US Navy nuclear submariner for nine years. During my time in the Navy, I ran the reactor, navigated the submarine across the Pacific and Indian Oceans, managed different groups of enlisted men, and helped manage several overhauls in drydock. My two most memorable experiences are sitting in the boat on Christmas Eve moored to the dock in Singapore when we lost shore power and had to snorkel on the diesel. No air conditioning and it was hot, sweaty, and smelled of diesel fumes. Merry Christmas! Then there was a surface transit through the Malacca Straits in the evening. Watching the sun set with dolphins jumping in the bow wake and no sound except the rush of wind and water. Well, and keeping a lookout for pirates. Literally. After the Navy, I moved to the Bay Area and worked for several hard disc drive and media companies. I spent over 30 years working in Silicon Valley high tech development and manufacturing.

How is life in Wenatchee? Wenatchee is the self proclaimed “Apple Capital of the World”. The main industry is fruit orchards and supporting the orchards. It has a population of about 35,000 people, and while hours away from any big city, has all the usual amenities. It is on the banks of the Columbia River and has an active outdoors lifestyle. It isn’t a rural community but it’s not urban, it’s just a beautiful location. While my kids are grown, I think it would be a great place to raise kids. And coming from the Bay Area I love that there are no traffic jams.

The core workers at our polishing operation were all trained twenty years ago by its founders and today moved up to hold key positions.

We are proud that women hold the majority of key positions on our staff, representing approximately 60% of our workforce.

Some of our polishing workers were raised locally and trained by us as well. Working in diamonds allows them to live the life they want without leaving their hometown. At present, two of our most recent team members additions own a house and a car in our local town. We also offer generous maternity leave and provide support in the form of playrooms reserved for children.

Wim Geyselings moved to China in 1995 when he was 30 years old. He started his own factory in Xi'an in 2012 with the key workers he trained from scratch from his prior key positions as a factory manager in Zuhai, China. Married with a Chinese in 2000 together with his wife "Wei Yingping", operations manager, they working hand in hand for now almost 10 years.

Hailing from a family of four generations of diamond experts in Antwerp, Belgium, one of the world’s diamond centers, Jeremy Barninka knows diamond.

Having built diamond polishing operations in Botswana, Russia, China, and Thailand for some of the biggest names in the diamond industry and delivered highest-quality diamonds to world-renown jewelry maisons, Jeremy combines craftsperson precision and attention to detail with a sense of beauty and wonder.

Our Belgium-based master cutter has a keen eye for perfection and unrelenting standards -- as well as innovation, most famously including the creation of the world’s first one-diamond ring designed by Jony Ive for Bono’s (red) Sotheby’s auction.

We can proudly say that Lan Nan is one of the best fancy polishers in the industry with 20 years polishing experience. Her speciality is polishing large Emerald cut diamonds.

One of our key polishers specialised in smoothing our perfectly cut diamonds, with more than 20 years of polishing experience. His wife is in charge of training new polishers.

Che Longgang has more than 15 years experience in quality control for polished diamonds. He was trained to become a planner five years ago within our factory. Today he is heading the planning department and manages 20 workers. His wife is working at the factory as well in QC.

Also trained by us from scratch, Gong Mengli is specialized in top facets polishing for rounds brilliant and all fancy shapes.

After graduating from university in China and originating from the city of Chongqing, “Michelle” Wei Yingping worked as a translator in a diamond factory in Zuhai where she met Wim with whom she then started a new factory. Before joining her husband in Xi'an, she had multiple key functions in diamond factories. Today and since the opening of Xi'an dragon diamond polishing co ltd she is leading the entire admin department and got 20 people working under her responsibility. 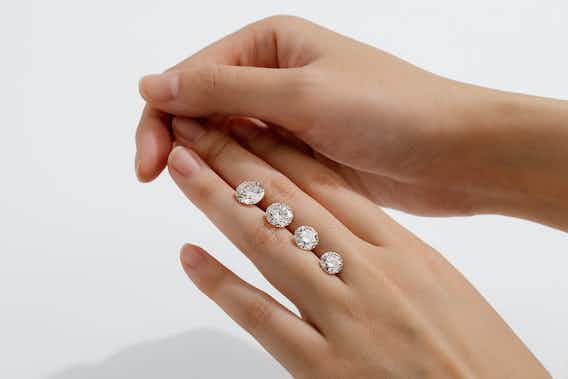 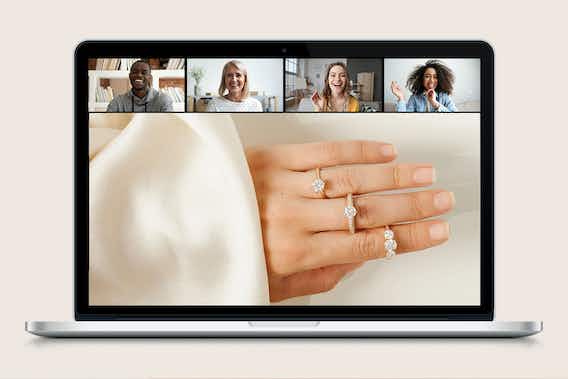 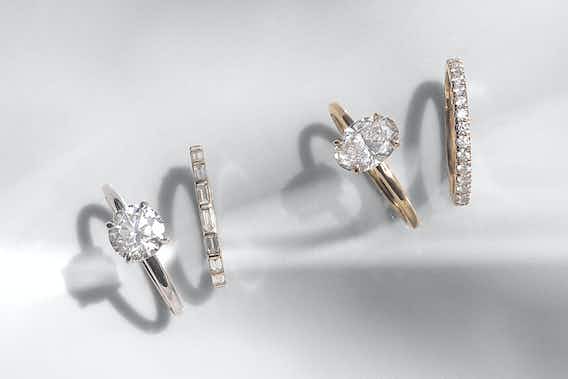 Our lifetime care
Bag
Enjoy complimentary shipping and returns on all US orders.
Nothing here but white space–
add some gold.